The priority
of the invention

The question of the priority of the invention

The first document attesting the research activity of Barsanti and Matteucci on the possibility of obtaining mechanical energy from the explosion of a gaseous mixture is the memorandum that was deposited at the Accademia dei Georgofili on June 5, 1853. In this document they were described the first experiments, carried out using simple devices, consisting of hollow cylinders and pistons; indications were given on the possible developments of the research, but what is more important is that the opportunity was already affirmed to “… use this return, and not the outward journey, to produce the desired useful effect through gears and mechanisms …”, that is the concept of a motor with deferred action on the return stroke.

In 1860, in France, the mechanician Lenoir patented his internal combustion engine, with direct action and without pre-compression. In an international circulating article, Figuer presented this engine as a sensational novelty and Lenoir as the inventor of the gas engine. At the same time, however, still in France, Abbot Migne defended, in the newspaper Le Monde, the priority of Italian invention.

Following the clamor aroused by the appearance of the Lenoir engine, the two Italians, already holders of numerous patents in Italy and abroad, considered it useful, to assert their ownership of the invention, to unseal and publish the envelope deposited at the Georgofili Academy, in September 1863; it was probably for the same purpose that the Ximenian Manuscript was written, in which the overall work of the two inventors is reconstructed.

Also in 1863, the so-called Bauer engine was built according to the English patent of 1857, which, following extensive experimentation, obtained from the Royal Lombard Institute of Sciences, Letters and Arts, the silver medal and the recognition of priority over the Lenoir engine .

The engine of the Germans Otto and Langen appeared in 1867 at the Universal Exposition in Paris, where it obtained the first prize. But the engine of the two Germans was none other than the version without auxiliary piston, mentioned in the French patent of 1858, of the two Italians, except for some minor details. 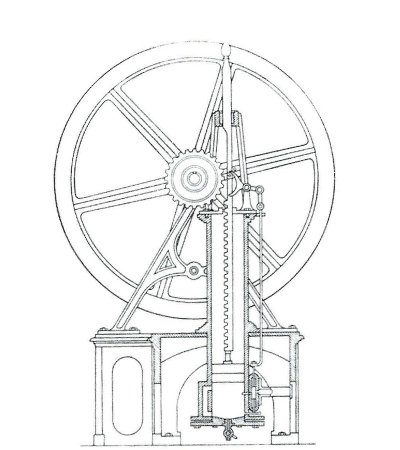 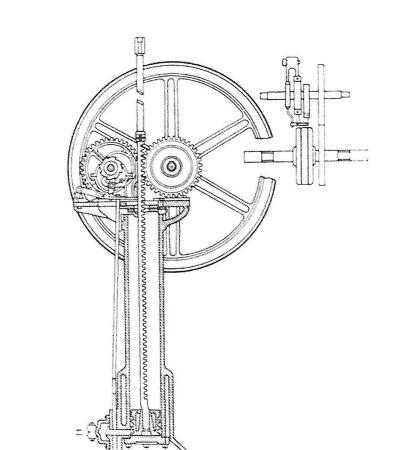 Section of the Otto and Langen engine of 1867

The analogy between the two engines was highlighted by many, including the french Durand, editor of the newspaper “Le Gaz” in Paris, who, in 1867 wrote: “… the gold medal awarded to the Germans was a mistake At first glance, this apparatus appeared to us to be nothing other than the bad imitation of the invention of Messrs. Barsanti and Matteucci, patented in France on January 9, 1858 … ”

Durand had the courtesy to send a letter to Matteucci to inform him of the events, who immediately left for Paris, taking with him the designs of the engines built, to claim the priority of the invention. Unfortunately, his arguments were not taken into consideration. Matteucci tried other times, over the years, to assert his reasons, without any success.

The priority of the Italian invention was subsequently recognized also by German historians, who remarked that Otto and Langen’s machine could possibly be considered an improvement of the Italian machine.

In Italy it was Senator Giuseppe Colombo who, in the Italian Scientific Yearbook of 1868, published an article in defense of the priority of the Italian invention; in December 1931, the then director of the Osservatorio Ximeniano presented a detailed documentation, to obtain official acknowledgment of the invention, but without any success.

In the first years of its activity, the Barsanti and Matteucci Foundation promoted numerous initiatives aimed at recognizing the priority of Barsanti and Matteucci’s invention, starting from the collection of fundamental documents and their translation into English and German, in order to be able to present them to the international scientific community and arrive more easily to demonstrate their theories.

On this basis, the Deutsches Museum in Munich was the first to recognize the priority of the invention to the Italians and placed a plaque in the salon dedicated to the internal combustion engine, in which it was stated that the first three-stroke internal combustion engine had been invented by Barsanti and Matteucci; moreover, since 2004, the model of the two-cylinder engine, made by the Foundation, is exhibited in the same Museum. Finally, the priority of the invention is universally recognized to the two illustrious inventors from Lucca.