The history
of the invention

1843 The idea of using the explosion of a gaseous mixture caused by an electric spark to produce mechanical energy came to P. Barsanti when, in his early twenties, he was teaching at Scuole Pie of Volterra.

Here, in order to show the experiment to his students, he had built by himself a “Volta pistol”; the original is still preserved in the Civic Museum of Volterra. Repeating the experiment many times, he understood that the explosive force of the gaseous mixtures could be used as a driving force. Moreover, he was aware of the need to continue the research, to better understand the phenomenon and to make its practical application possible.

Barsanti, however, did not have the technical skills to continue with the experiments.

Thus, towards the end of 1851, he began his collaboration with Felice Matteucci, specialized in mechanics, with whom he undertook a series of experiments aimed at conceiving a mechanism capable of transforming the explosive force into a regular, successive, uniform motion.

In 1853, the experiments having reached a good point, the two inventors decided to illustrate the results obtained in a memorandum which, on 5 June, they deposited at the Accademia dei Georgofili in Florence, in a sealed envelope that should have been disclosed only subsequently, upon their request. This responded to the need to prove the activity carried out and the results obtained in order to be able to claim the authorship of the invention, and at the same time protect them from use by others. The envelope was opened ten years later, on September 20, 1863, in order to support the priority of their invention in relation to the appearance of the Lenoir engine and the enormous clamor that this had caused.

Probably in the same year 1863, another document was drawn up, the Ximenian Manuscript, which summarizes everything the two inventors had achieved in their studies and which therefore represents a fundamental document for the reconstruction of the overall work. 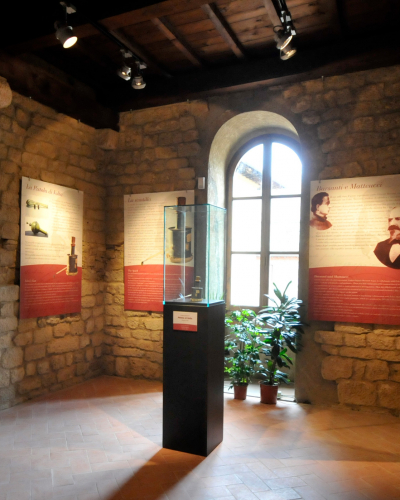 The first prototype of the engine was built in 1853: there is evidence of it in some invoices and letters from the Pietro Benini firm in Florence. The engine worked only on an experimental basis, without any practical application.

In 1854 Barsanti and Matteucci obtained the first English certification n ° 1072, which concerned an opposing two-cylinder engine.

Encouraged by the achievement of the certificate of 1854, on 21 October of the same year they formed the Association for the Construction of a New Engine, in order to make the most of future patents and the fruits of the applications of the invention.

An engine conforming to that described in the first English certification was built in 1856 and was put into operation at the workshops of the Maria Antonia Railway in Florence, to transmit the movement to a scissor and a drill.

In 1857 Barsanti and Matteucci obtained the English patent relating to the engine in two different construction solutions: with or without auxiliary piston. These two engines, in particular the second, formed the basis on which the so-called Bauer engine was built, years later, which determined the success of the two scientists. 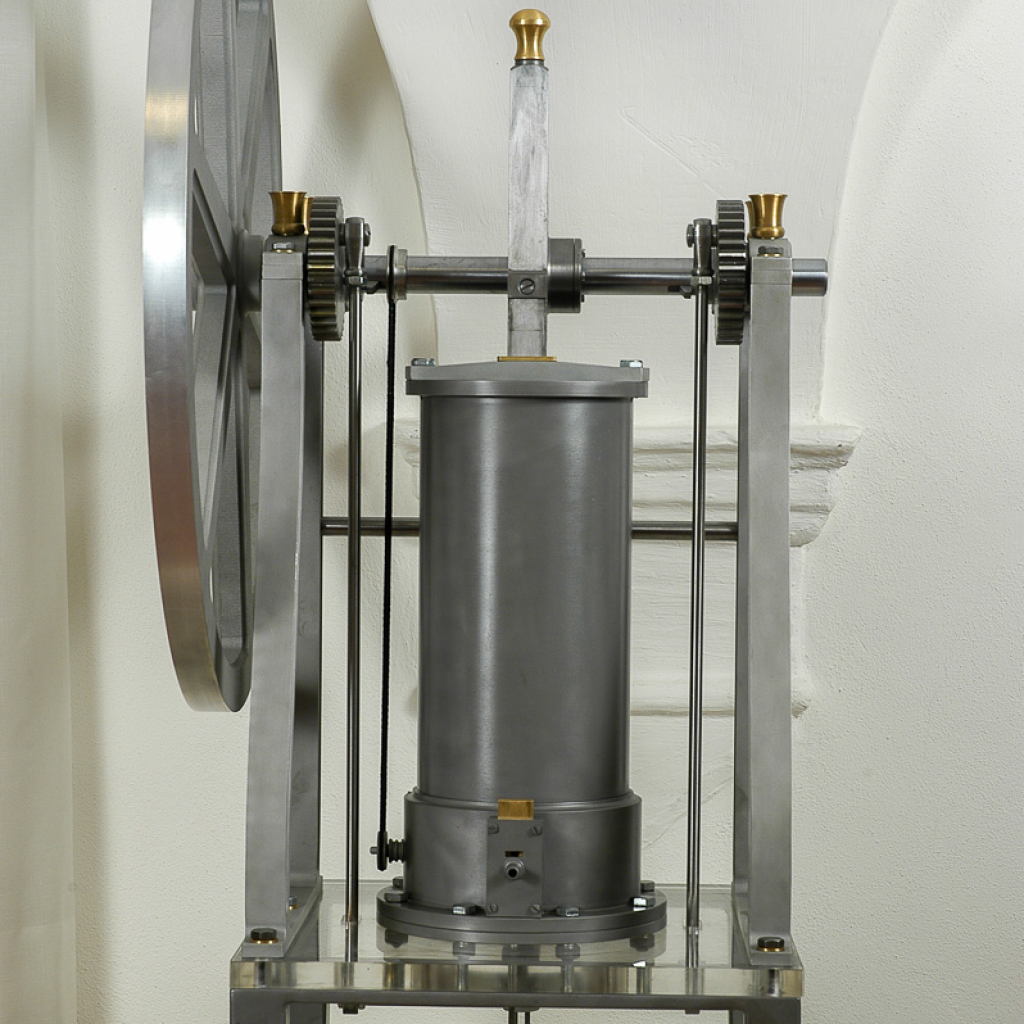 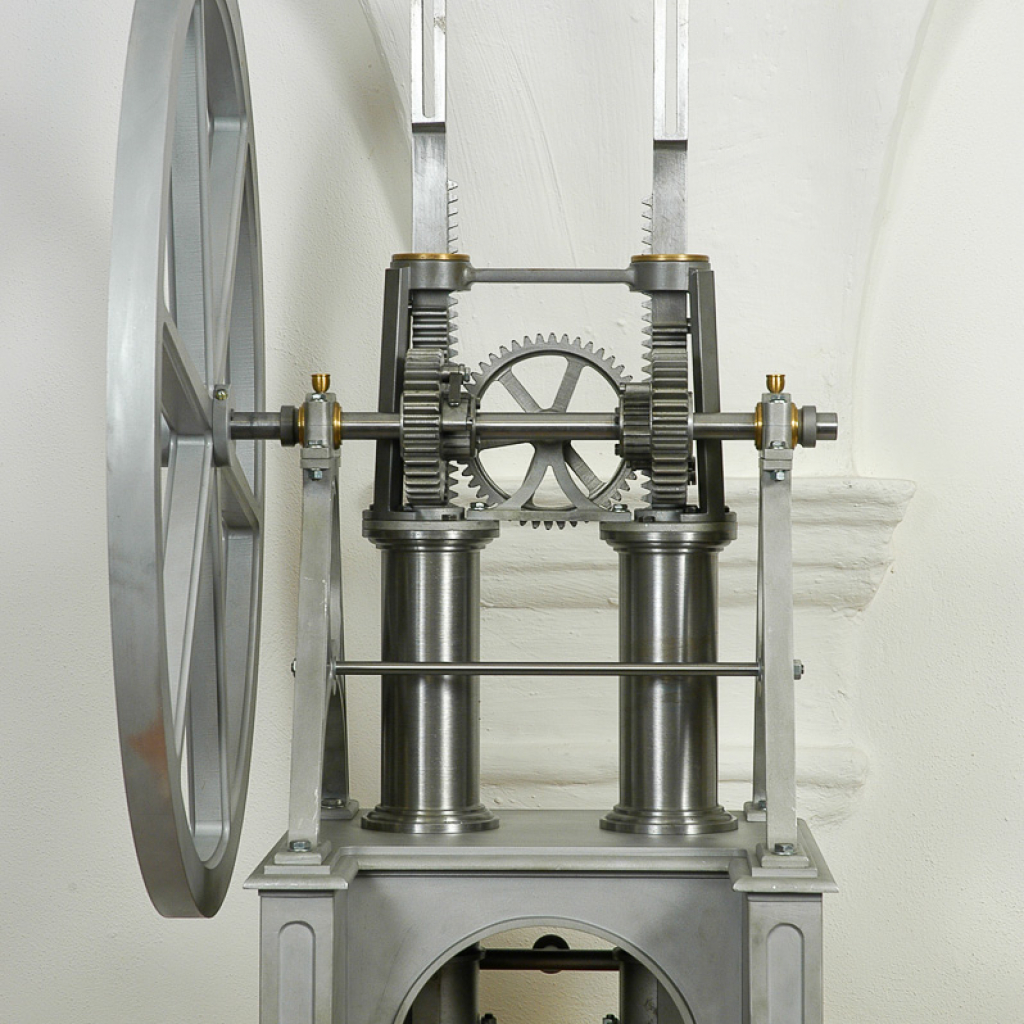 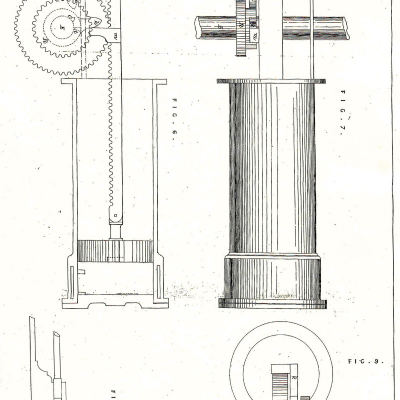 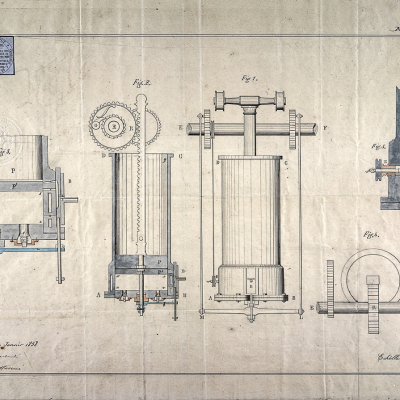 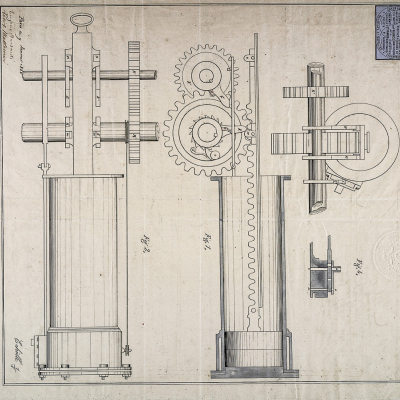 In 1858, an engine was built in the Calegari Foundry in Livorno, which should have developed a power of 20 horsepower, to be used on the “Veloce” boat of the Lariana Company in Como. This engine consisted of a single cylinder and two opposing pistons, a solution that eliminated the problem of kickbacks; the engine did not reach the required power and was therefore abandoned. 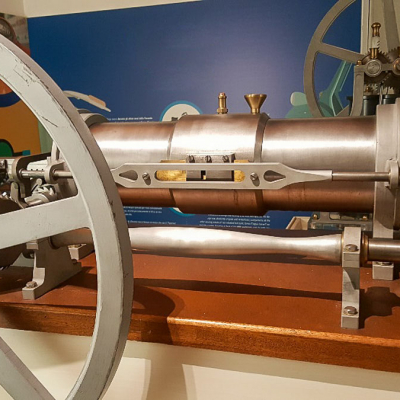 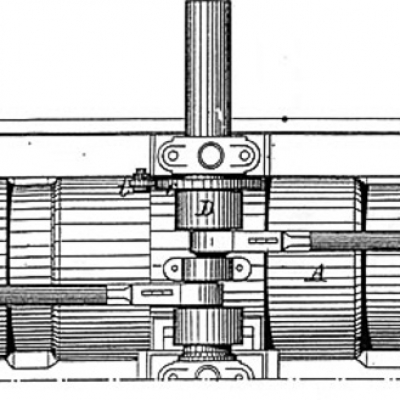 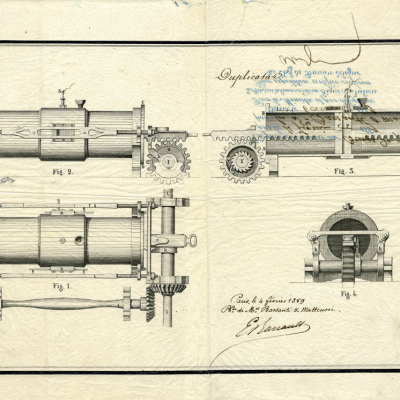 Also in 1858, another engine with two opposing cylinders and pistons was built by the Pietro Benini firm, which satisfied the two inventors. 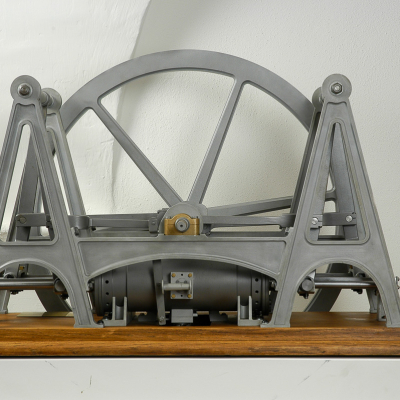 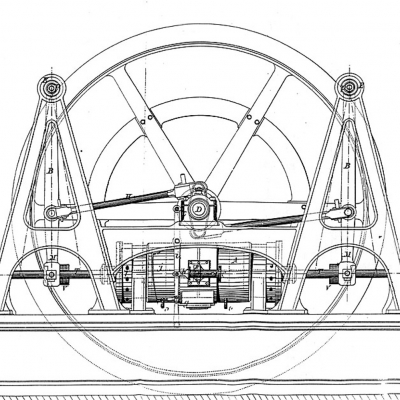 After the success achieved with the presentation of the opposing piston engine, built by the Benini workshop, in order to commercially exploit their projects, Barsanti and Matteucci considered it appropriate to transform the Association into a company, which should have taken care of the production. and the sale of engines. Thus, on October 14, 1859, the Anonymous Company of the new Barsanti and Matteucci Engine was born, of which they were the technical directors.

In 1863 it was decided to build an engine according to the model of the English patent of 12 June 1857, that is, with an auxiliary piston and with the transmission of the movement to a flywheel by means of a rack and pinion. The construction was entrusted to the company Bauer & Co. of Milan, also known as the Elvetica, which completed the engine in the early months of 1863. The assembly work was followed only by P. Barsanti as Matteucci, since March 1862, became seriously ill, so that he had to resign as technical director of the Company. 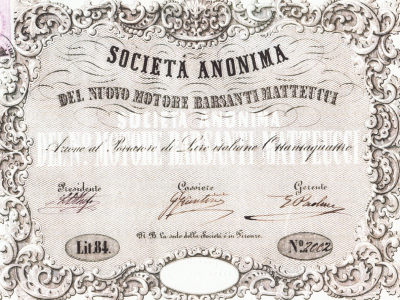 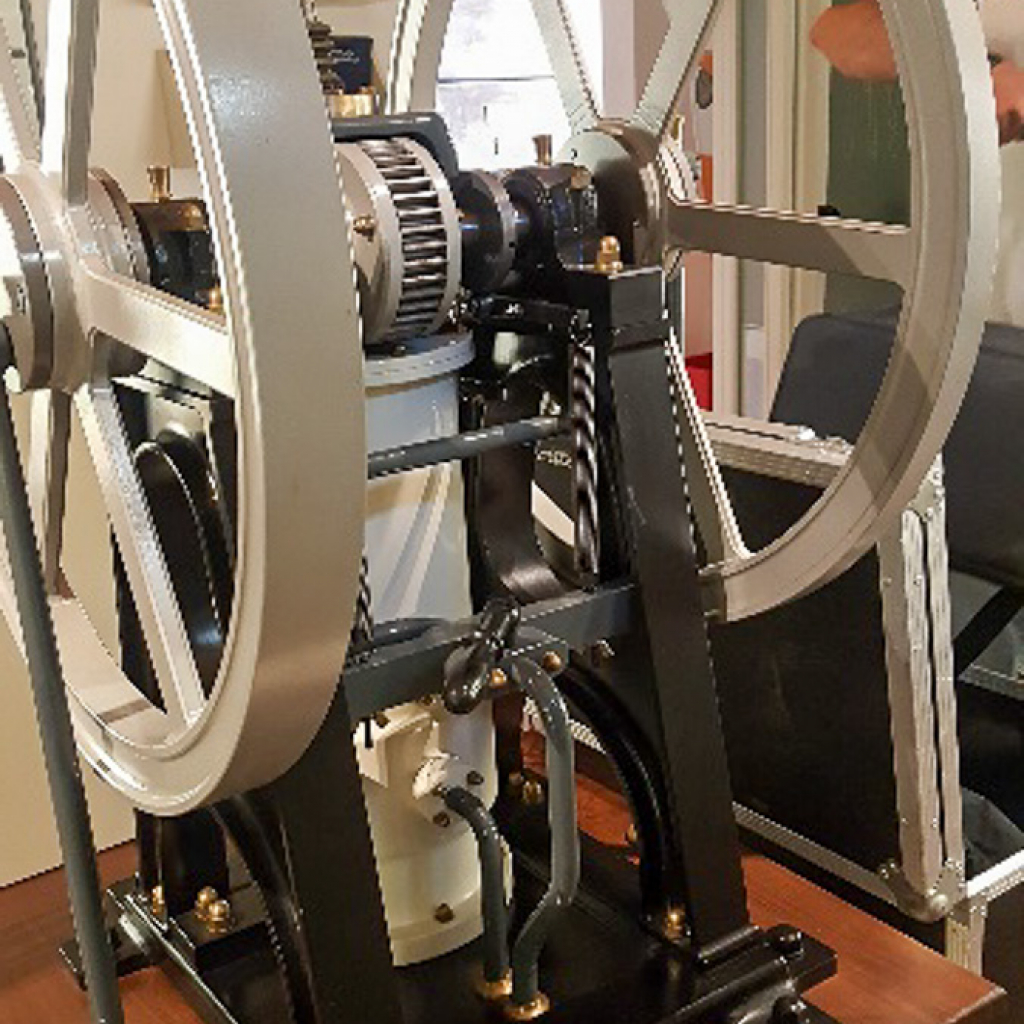 This engine was examined by the Royal Lombard Institute of Sciences, Letters and Arts: tests were carried out and also a comparison between the consumption of this engine, the Lenoir one and the steam engine. From the report published in the Proceedings of the Institute in July 1863, the supervisors stated that they fully understood the importance of the invention and also affirmed its priority over that of Lenoir. The Royal Institute awarded Barsanti and Matteucci “the silver medal, with judgment suspended for major prize, after the outcome of further tests”.

The success obtained by the 1863 engine and the numerous requests received led the inventors, also stimulated by the Presidency of their company, to start large-scale production of small-power engines. The John Cockerill Company of Searing near Liège was chosen for the mass production of the engine.

In March 1864, P. Barsanti left for Belgium taking this engine with him, which aroused great admiration.

Unfortunately, the mass construction was not started due to the death of P. Barsanti, which took place on April 19 of that same year in Searing.

After the death of P. Barsanti, Matteucci, with the collaboration of the technician Babacci, resumed his studies on possible improvements to be made to the engine.

After the appearance of Otto and Langen’s engine, which took place in 1867, Matteucci repeatedly tried to have the authorship of the invention recognized, without obtaining any success.

In 1866 the company was dissolved and Matteucci returned to his studies in hydraulics.